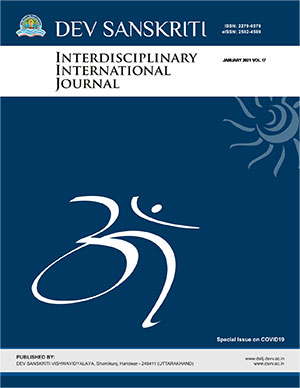 Dev Sanskriti Interdisciplinary International Journal (DSIIJ), published by Dev Sanskriti University, has successfully served its one of the primary objectives for past 9 years i.e. to provide platform for research on interdisciplinary subjects of Vedic Culture (Dev Sanskriti) and to provide a proper blend of science and spirituality. With this issue of DSIIJ, we welcome distinguished new editorial board members Professor Marcis Auzins and Professor Valdis Pīrāgs from University of Latvia, Prof Luis G Franceschi from The Commonwealth, London, Prof Dr John N. Giannios from University of South Wales, United Kingdom, Prof. Antonietta Rozzi from Bolzano University, Italy. We also thank Dr. Gdoda, Papp - Vary, Dr. Khan and Dr. Mandal for their past contribution and generous support for DSIIJ vision and journey.

The present 17th volume of the journal includes contributions from across disciplines covering the interdisciplinary subjects of Ancient wisdom. In the first article, Marcus Schmieke from Germany described Four-Valued Logic perspective on Bohm`s Quantum Potential Approach to Consciousness. In the second article Mollika Ganguly and her colleagues have shown the effect of Prosody of Rhythmic Yoga-Based Recitation on Positive and Negative Affect among Adolescents and indicated the Vedic potential of Mantras and its chanting.

As the world is entering the post COVID19 era, the pandemic has taught many lessons. One such important aspect of the COVID19 time was the problems Indian Migrant class faced especially during lockdown time. Dhananjay Mankar and Rudrani Ghosh from Tata Institute Of Social Sciences, Mumbai have studied it with reference to the mental health and psychological impact they had faced.

Yogic practices and Ayurveda concepts have a special relation. Authors Sunil Kumar Yadav and Niyanta Joshi in the next article described an Ayurvedic perspective of Hrid Dhauti given in Shatkarmas with special reference to Human Physiology.

In the next article, Badri Narayan Mishra described the teachings of Shrimad bhagvad Geeta for having peace and solving value-crisis and suggested restructuring in the modern education system in the light of the same. Besides wisdom, the ancient traditional health methods such as Marma Therapy are gaining popularity due to its effective utility even in modern times; in the next article Alka Mishra and Vandana Shrivastava reviewed the traditional method of Marma with its presence in the Indian Scriptures.

Indian Culture and traditions exist in different forms in different parts of the world. Among the two perspective articles covered in the present issue, Surendra Mathur described the similarities between festivals ‘Diwali’ in India and ‘Samhain’ in European civilizations. Next, in the perspective section, Sunil Deshmukh has studied the utility of PragyaYoga and Pranakarshana Pranayama on Self-Concept level especially in Juvenile Delinquents.

We thank all our reviewers and editorial team members for bringing the Journal issue to our readers. With the coming of Vasant Parva on February 16, 2021, in the next 2 weeks, which has a special importance in Vedic culture, we wish you all the Happy Vasant Parva!